The name of Samothrace always brings clear images, the smell of herbs and the feeling of unfulfilled plans to my mind. Last October, however, my greatest ‘unfulfilled plan’ was turned into a ‘clear image’.
But I should start from the beginning.
For me, the works of Gerald Durrell were the first introduction to the magic of the Greek islands; I think Mr Durrell could make even the most determined home bird get on a boat and sail to the lovely blue, the scorching sun and the critters. 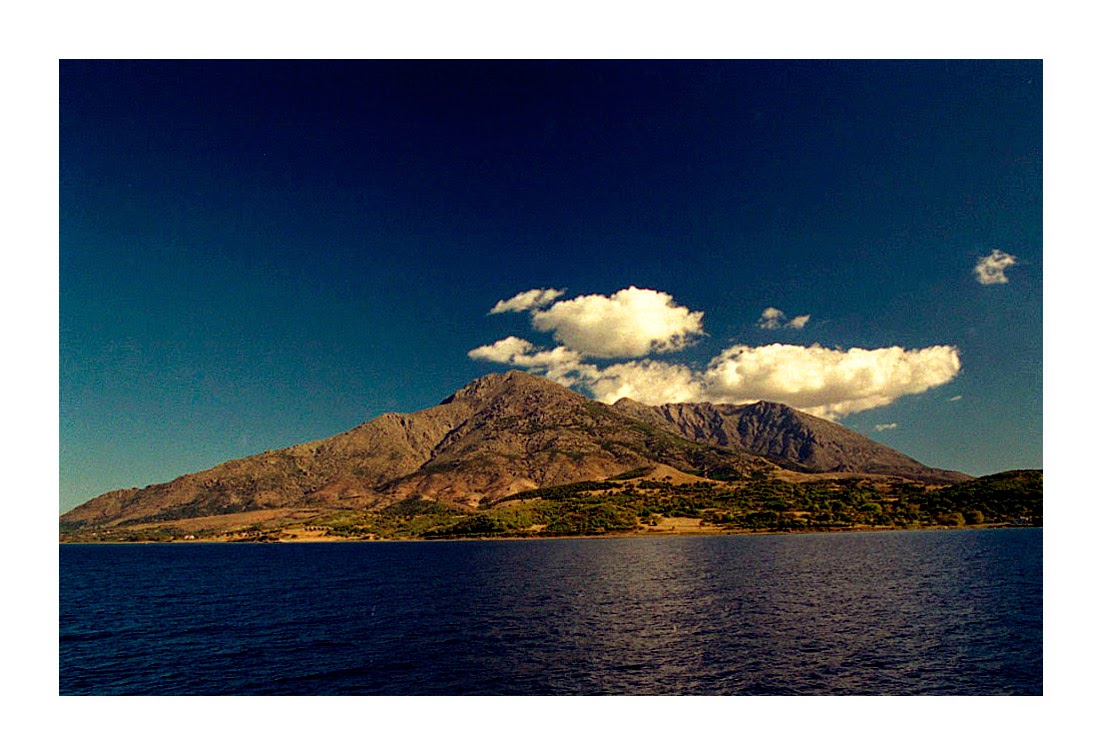 I first came to Samothrace, the wildest island in the Aegean, on a business trip. Two hours after the ferry left the port of Alexandroupoli the green mass of Samothrace’s mountain, Saos, emerged on the horizon. It is fair to say that at that very moment I was overwhelmed by the urge to conquer its peak. It bears the name Fegari  (Moon) and rises at 1614 metres above the sea. The locals named it Moon as its great height obscured even the night luminary. They also say that this was where the gods watched the battles of the Trojan War from.
The ridge of Saos Mountain divides Samothrace in two –South and North. The southern half of the island is barren and rocky, whereas the northern is greener, crossed by several short rivers with crystal clear water. The rivers race down from the top in beautiful cascades and invariably end their short course in the sea. 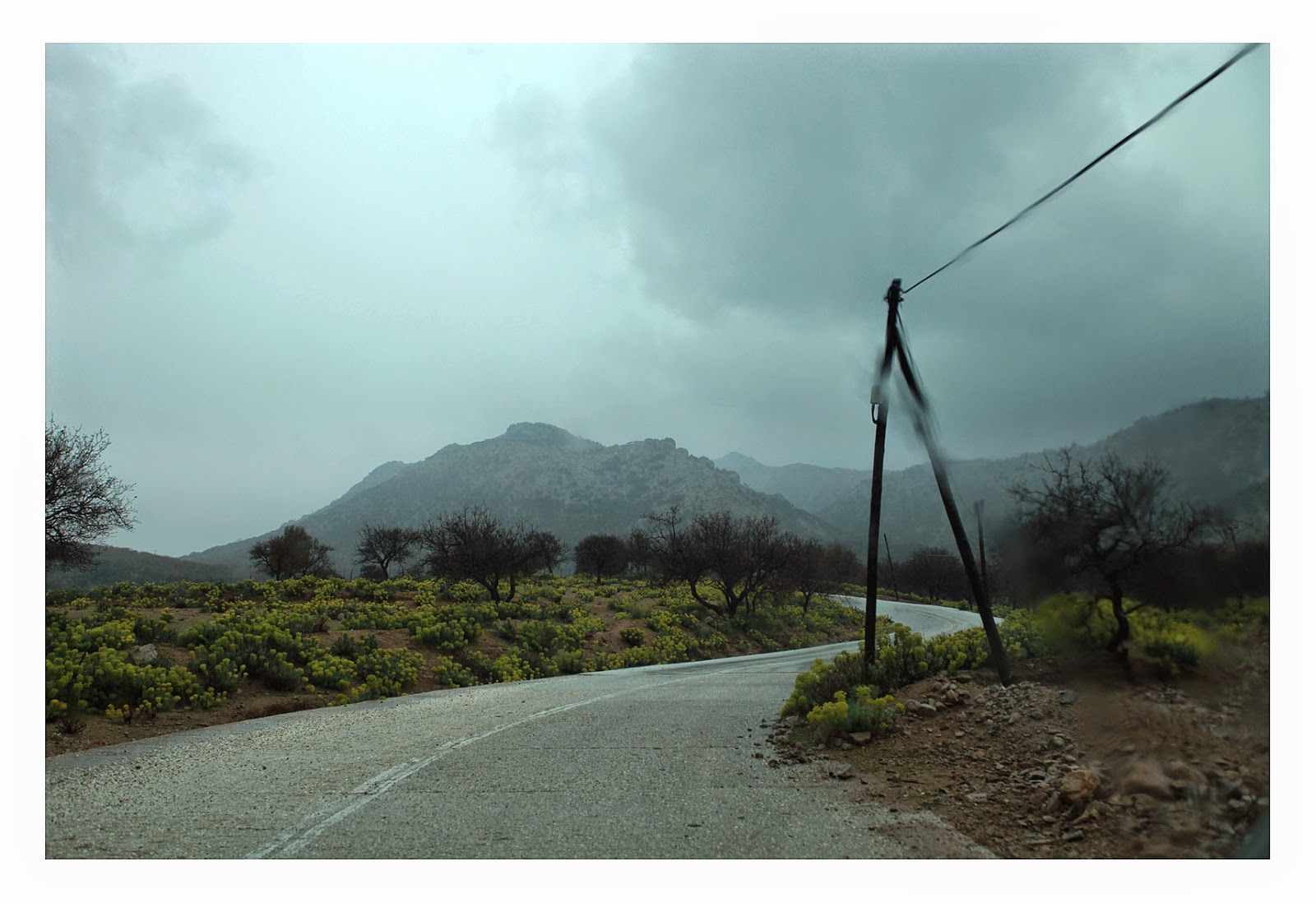 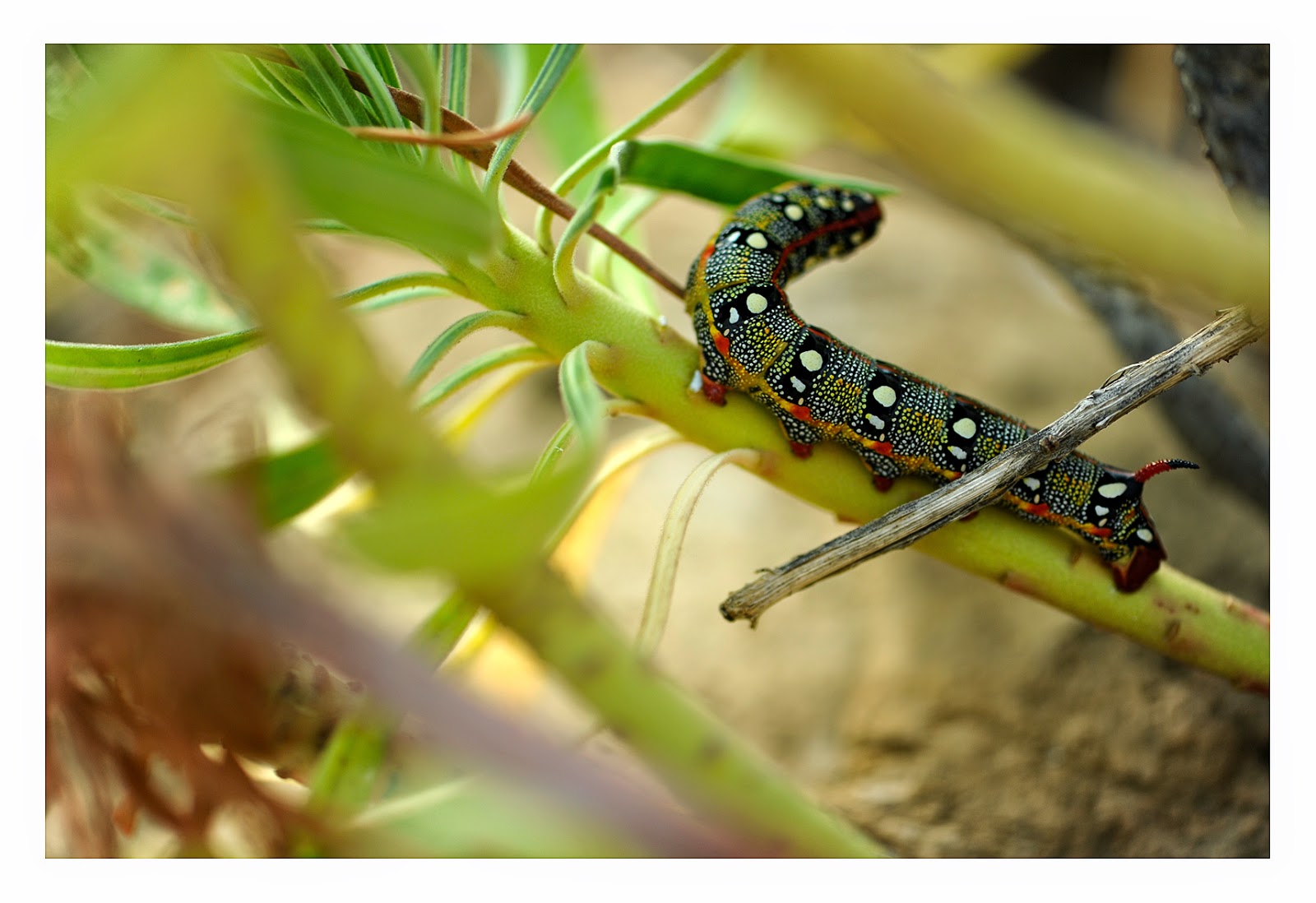 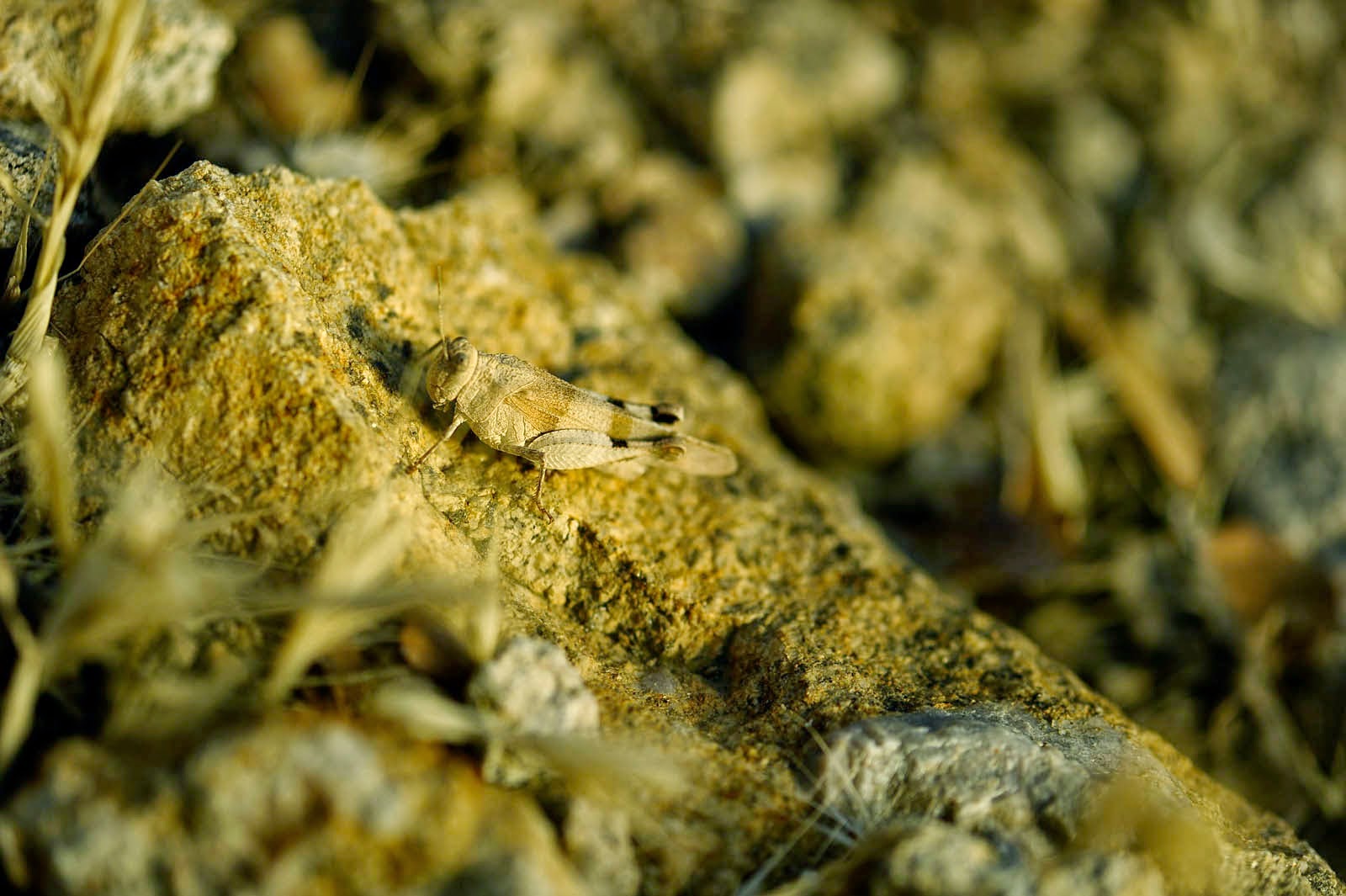 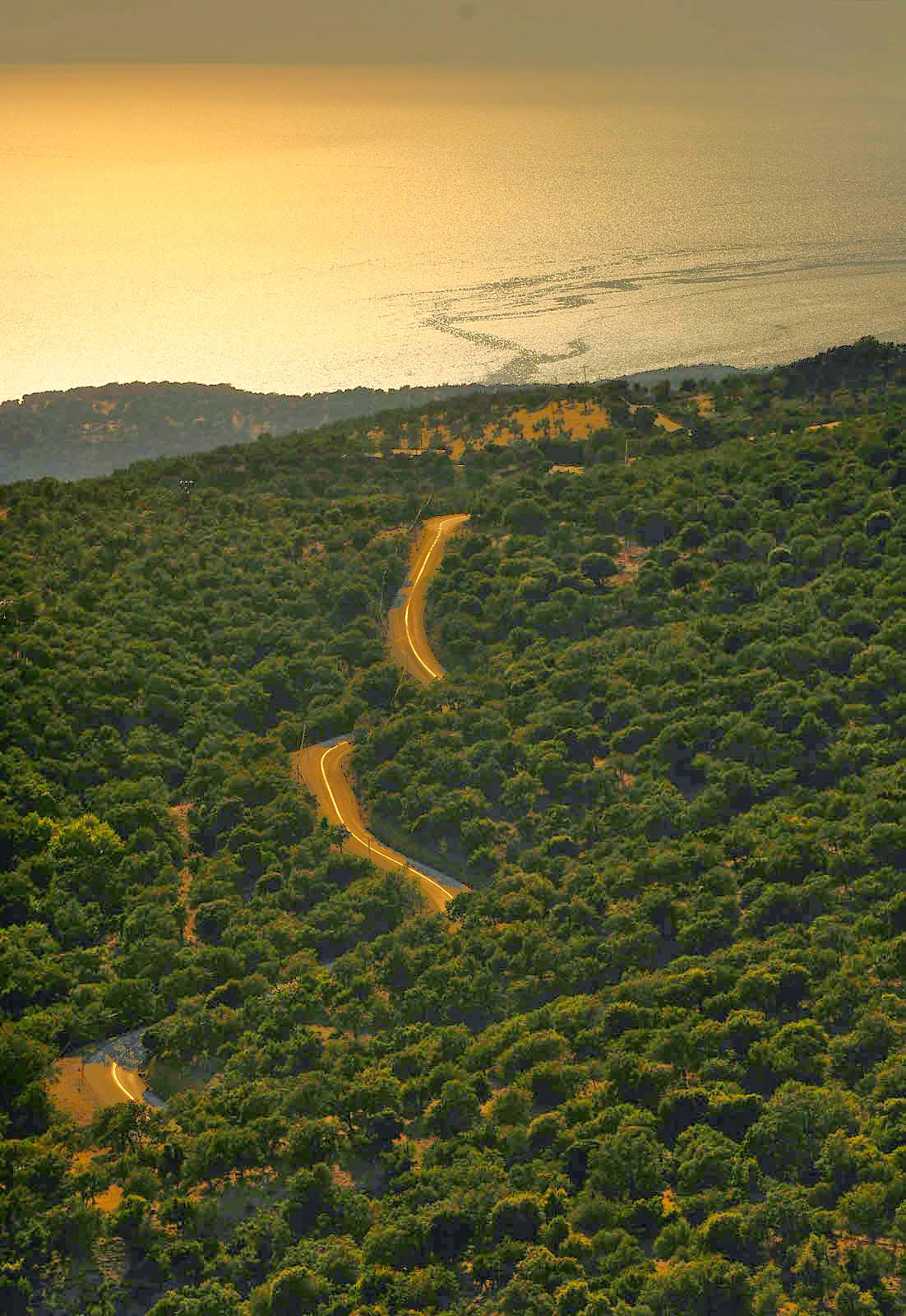 I read somewhere that had Robinson Crusoe sailed the Aegean, Samothrace would’ve been the most suitable island for his adventures. Civilization has a weak grasp on this paradise – electricity comes from the continent on cables along the sea bottom, and garbage is carried away on the ferry.
The only thing I managed to do on my first visit was to acquire a map and study the tracks on the mountain. I came back to the island several more times for shoots but I never found the time for Fegari…

We leave for Samothrace in mid-October. Our one goal – the peak. In Bulgaria it’s been cold, with rains, for a few days but we do not let the weather discourage us. On the way to Greece the clouds clear up and bright sun and pristine blue skies greet us in Alexandroupoli. The luring shape of the island can be seen from the port.
As we land on the familiar coast at dusk, our first job is to go to Therma and look for the starting point of the track. There is nobody there to show us the way, so I start alone up the hill. The asphalt ends and I continue along a muddy dirt road lined with centuries-old plane-trees. They are not too high but their diameter exceeds that of every tree I’ve seen. As night sets in they seem even more impressive. I am forced to turn back even though I haven’t found the track. 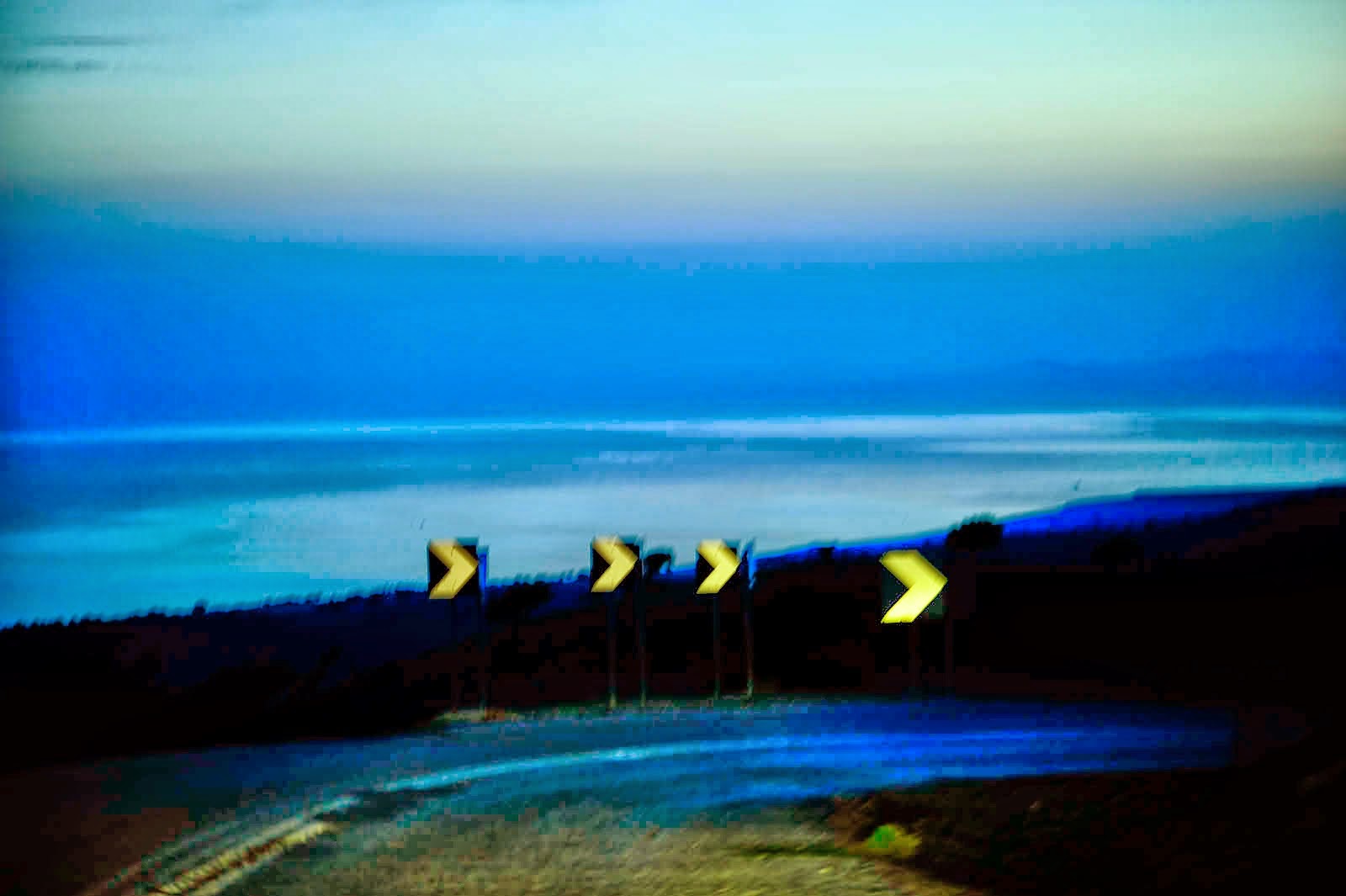 In front of the entrance of the hot mineral baths we cross paths with a man holding a towel. We chat him up. It turns out the track begins just behind the baths. The man warns us: if the top of the mountain is covered in mist in the morning, we must not try to climb it.
We start our hike before sunrise, after a restless night despite the lullaby of the waves. Our endeavour seems even more enchanting under the full moon. It shines on the sea below us, connecting the island to the continent with a track of light. But the track to our Moon is in another direction, so we turn our backs on the sea.
A cart track takes us all the way up to the island telecommunication tower. The track is fenced by thickets with densely intertwined twigs. We continue further up and walk into the Martini Forest Reserve. The trees here are not too high but their thick trunks and awkward, twisted limbs mesmerize us. The ground is covered by broken branches. Up high the view becomes even more magical under the rising sun. 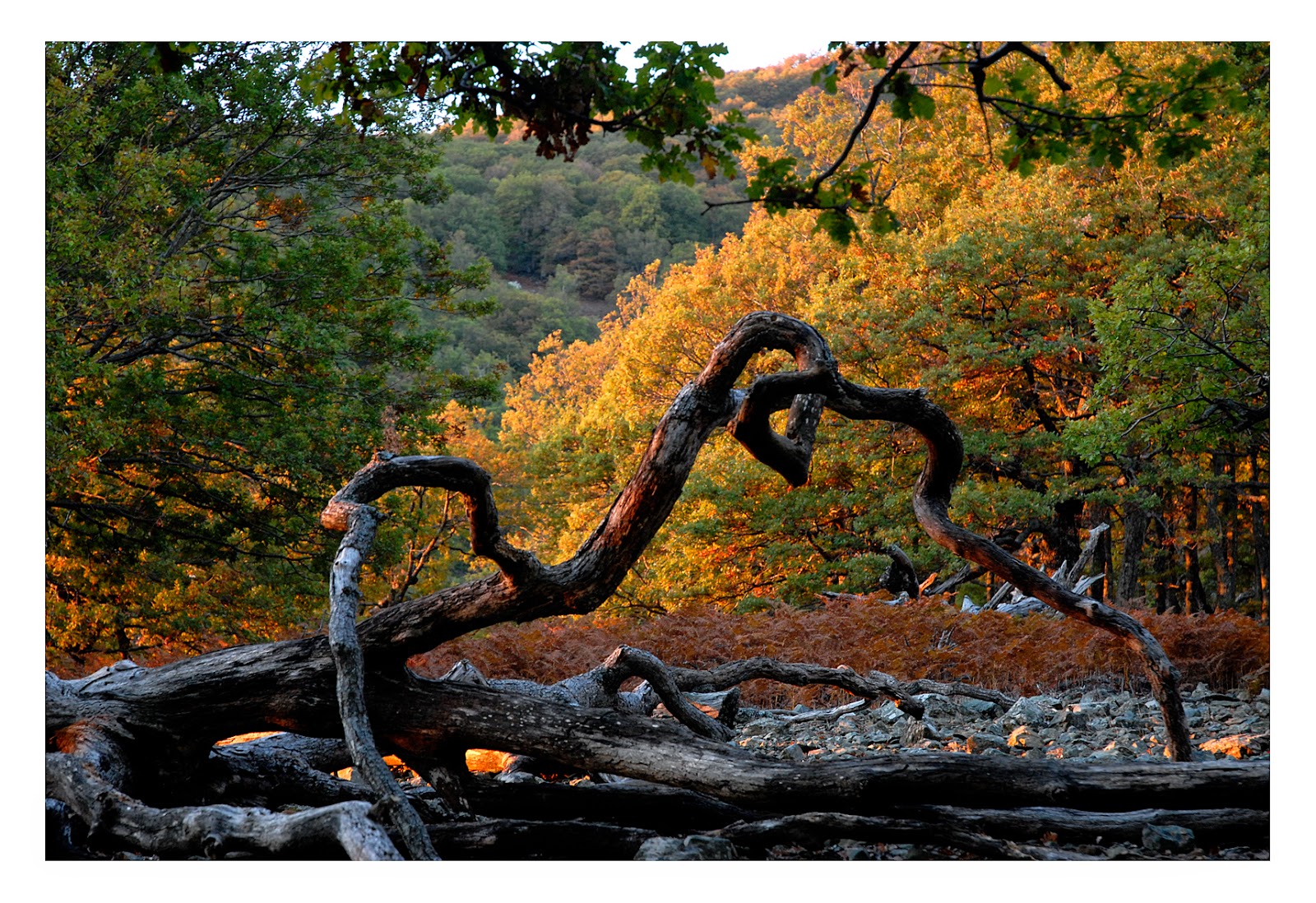 A few hours later we leave the forest behind and reach the ferns. At last! I can admire the view I’ve dreamed for for years. The sea stretching below makes every minute of waiting worth it. But it is not something to be described, it must be seen.
We hike up hastily since under my suggestion we’ve bought tickets for the three o’clock ferry. The vegetation disappears above the ferns only bare rocks remain.
The easy-to-spot marks of the track also end here. Further up it is marked with dots of red paint on the rocks. An important notice: the marks are clearly visible on the way up but remain hidden at descent. So, try to memorize your own landmarks for the way down. 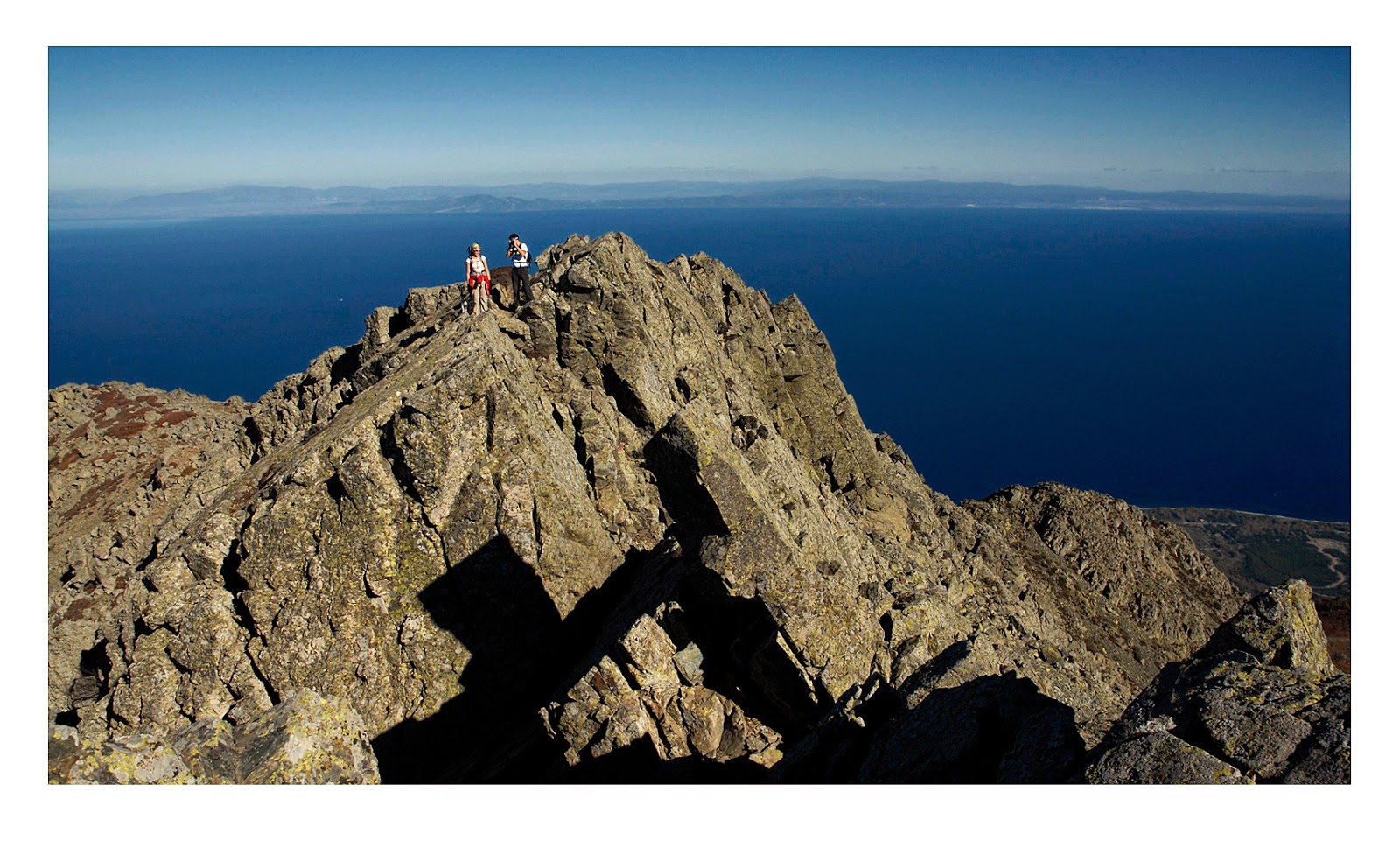 The steep ridge of Saos reminds me of Koncheto Ridge in Pirin Mountain. At last we catch a glimpse of the peak in the distance. Walking along the ridge isn’t hard but we need to be careful; it is hard to keep your eyes on the track ahead when you’re surrounded by the breath-taking view of the island and the sea below. Imagine yourself on the rocky ridge; the forest is a bit further down, and the rest is skies and sea. You are in the sky and it turns into sea. Fegari offers a beautiful view of the nearby Turkish island Gökçeada, as well as of Samothrace’s longest sand beach – Pahia Ammos. 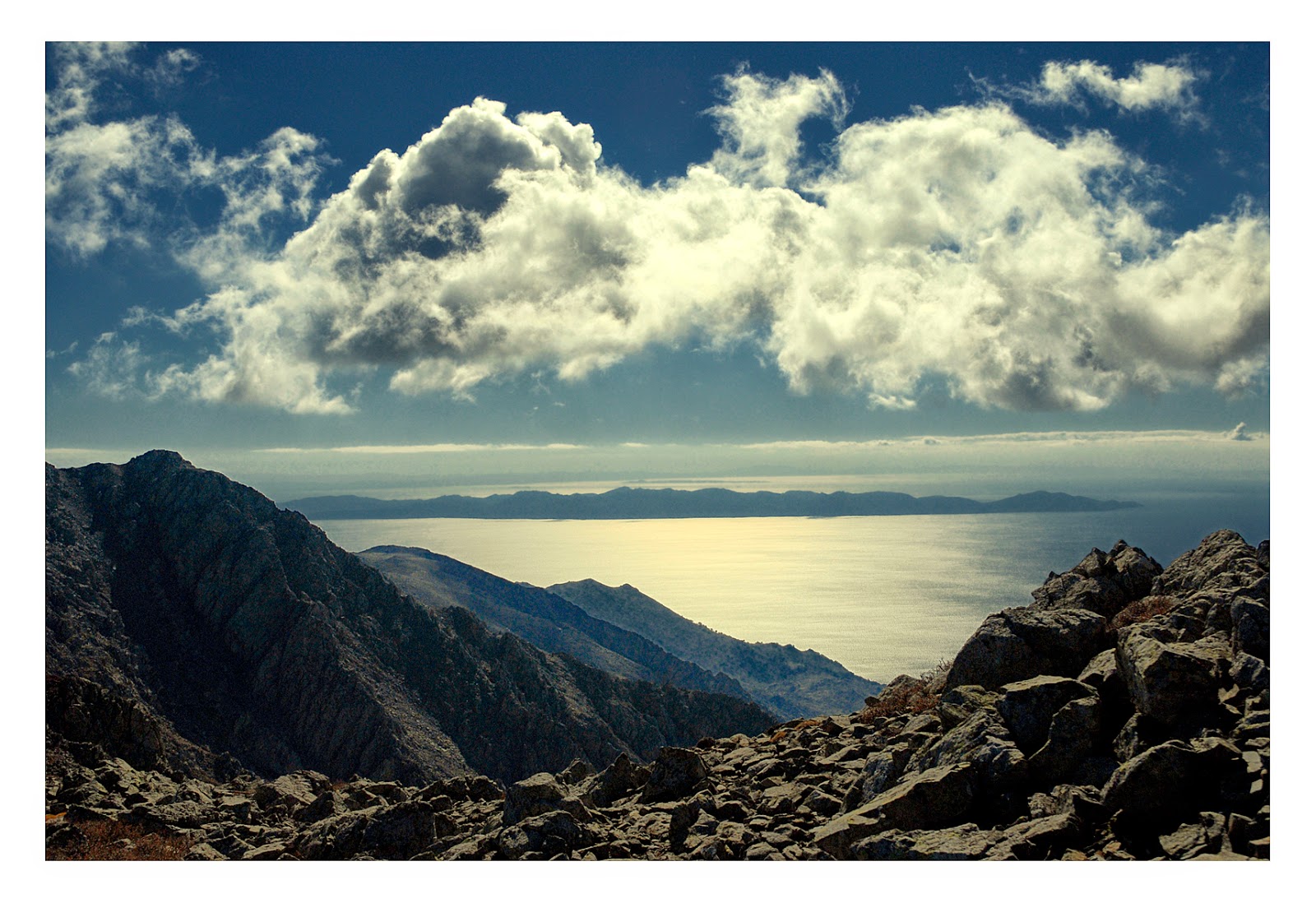 Alas, we need to hurry right back if we are to catch the three o’clock ferry. I take pictures of the fallen trees of Martini Forest almost running. Would there be a time when I wouldn’t have to run when I feel like taking pictures! J 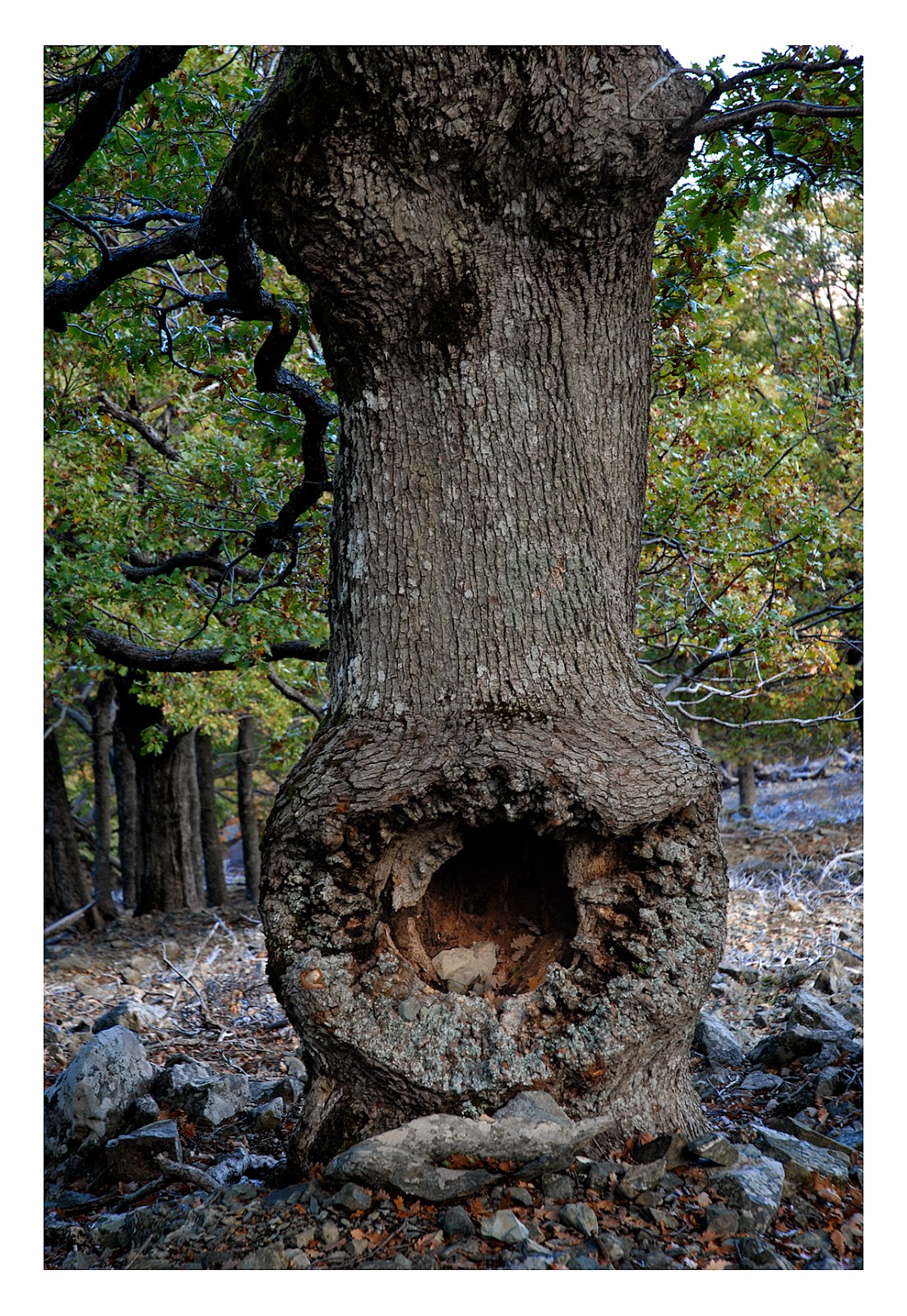 At the port we get off the car and Miro drives it onto the boat. A policeman in sunglasses approaches me; he is smiling and wants to know if we found our way to Fegari. I give a nod in confusion; how come the police in Samothrace know we’ve been to the peak? The policeman senses my confusion and takes off his sunglasses. It’s the man that gave us directions on the day before… 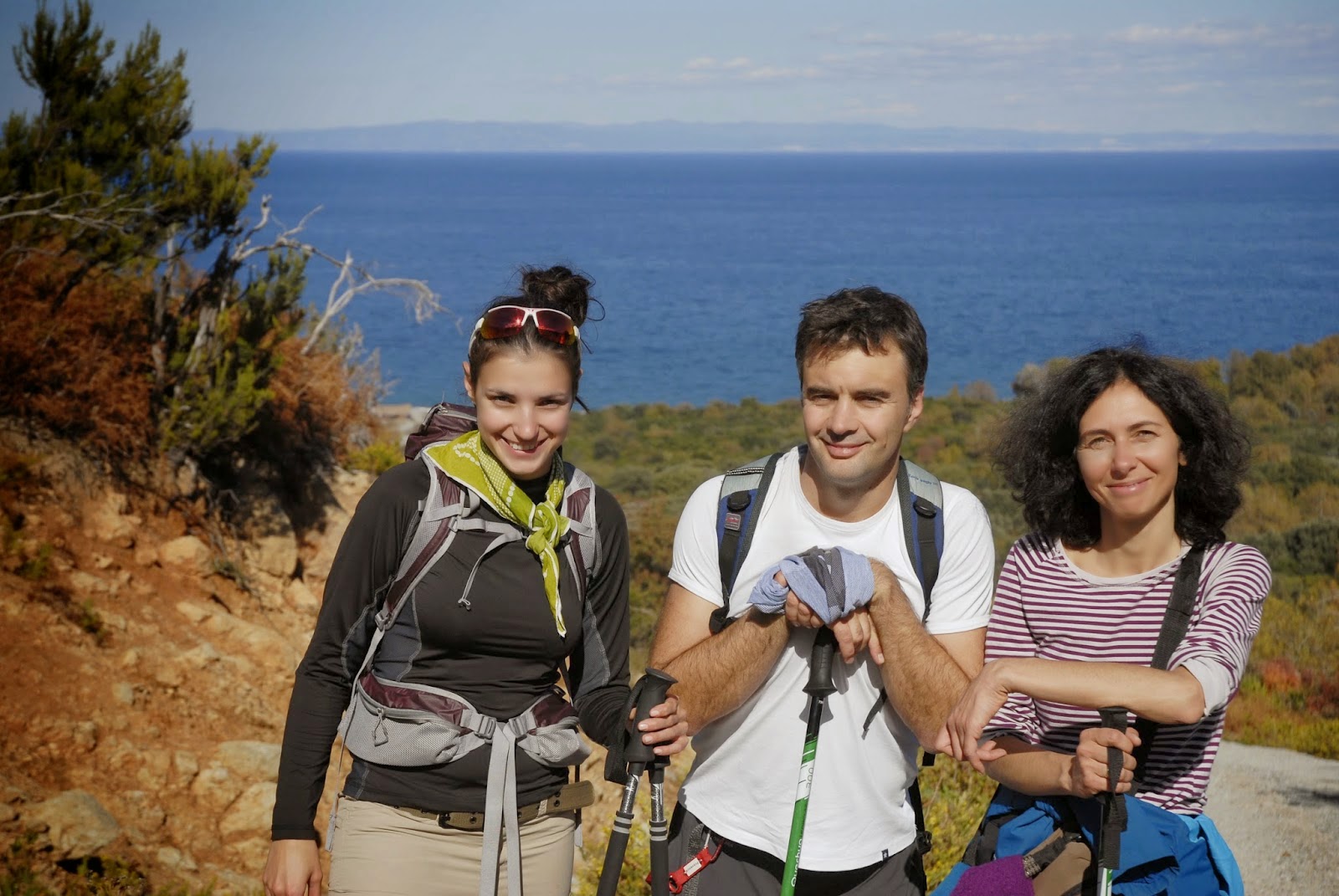 Moments later we’re already on our way back home and the island slowly disappears. But I am already busy with making plans for my next visit. It’s the cascades’ turn… 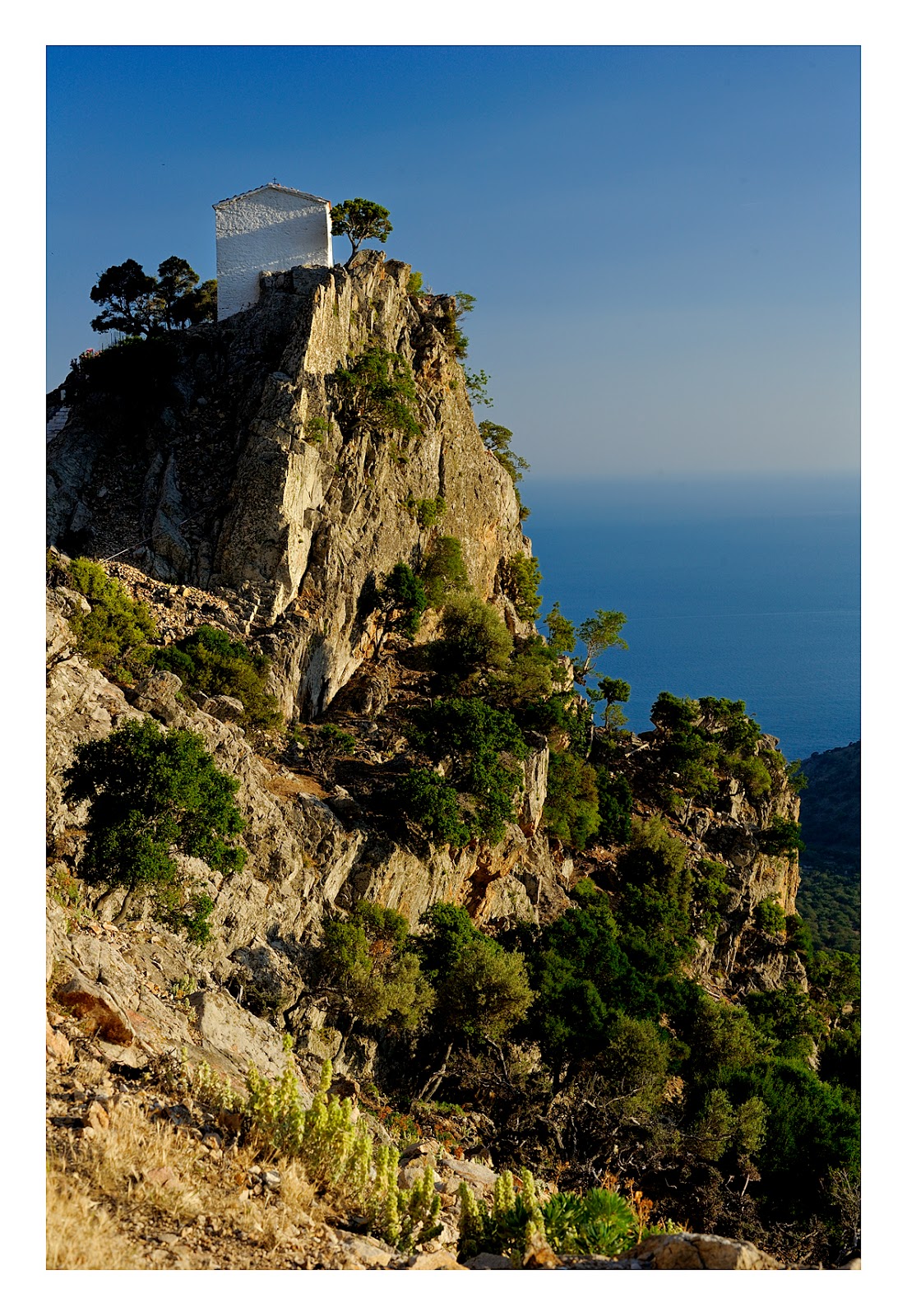